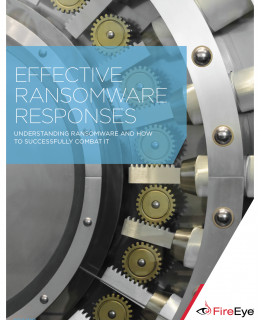 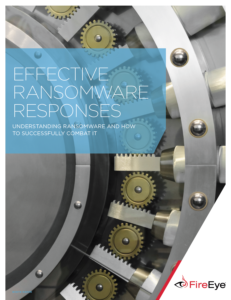 EFFECTIVE RANSOMWARE RESPONSES
UNDERSTANDING RANSOMWARE AND HOW TO SUCCESSFULLY COMBAT IT

The M-Trends 2016 Annual Threat Report1 indicates that Mandiant investigators responded more often to clients dealing with digital blackmail schemes. Most cases cited impacts to either the confidentiality or availability of data. Targeted organizations were threatened with the public release of sensitive data while targets of opportunity were typically infected with commodity ransomware such as TorrentLocker or CryptoWall. In a particularly high-profile case, the Hollywood Presbyterian Medical Center in Los Angeles was attacked on February 5, 2016. This hospital lost access to electronic patient records and email, and its business operations and administrative functions were significantly affected, causing the hospital to reportedly pay a ransom equivalent to approximately $17,000.

Ransomware operators have infected victims worldwide using their native languages. This type of malware has primarily affected Windows operating systems, but in recent years, ransomware has been developed to affect other operating systems, such as Android (Simplocker) and Mac OS X (KeRanger). Organizations have a pressing reason to exercise caution against ransomware due to its expanding and widespread distribution and popularity among malicious actors.

Reducing Cyber Exposure from Cloud to Containers: 5 Key Learnings from the CISO POV